Relaunching From The Water

Relaunching the kite from the water can be more of an art than a science at times, but there are some general rules that, if you follow them, will have you up and riding again in no time (most of the time!).

For the first part of this guide I will assume that you are attempting this on a fairly waveless day  or at least a day of smallish/less powerful waves. As the wave height increases there are an increasing amount of aspects you need to be aware of which we will look at in the second section, “Ever Decreasing Circles of Mastery.” 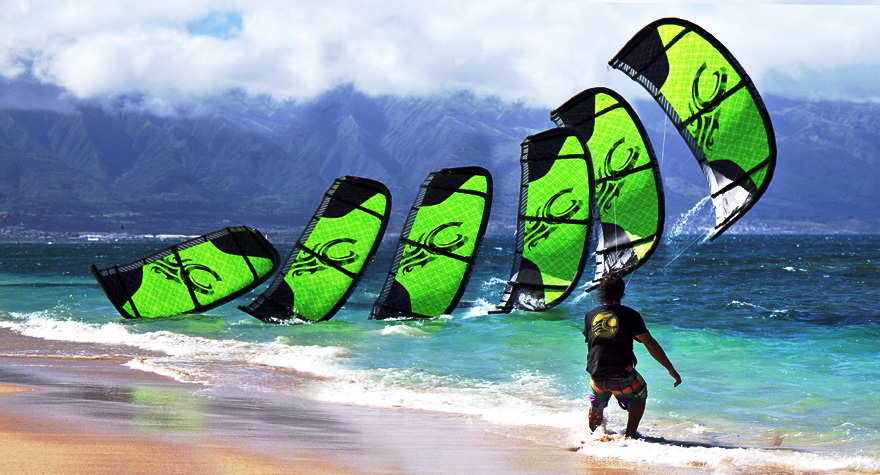 As soon as the kite crashes your first priority is to ensure there is tension in the lines (this may mean a quick bit of swimming/splashing about on your part). As long as there is tension you have control of the kite, if the lines are slack the kite will simply respond to whatever the wind and waves tell it to do, and often they will tell it to misbehave terribly, drifting in to the power zone and then inexplicably powering up, being flattened by waves and other actions that will leave you cursing.

Once you have tension in the lines, it is, (in theory) a simple case of steering the kite either left or right using the bar. Have patience, this may take a while. Slowly the kite will start to walk around to one edge of the wind window. Currents and waves will have an effect on this and you may find relaunching one way is considerably easier than the other.

All things being equal however, we recommend you always relaunch the kite on the beachward side of the window. This way you are being dragged back towards dry land. To start with or on a difficult day, relaunching your kite can take a while, if you’re relaunching on the seaward side you can find yourself miles out without realizing it before you get the damn thing back in the air.

Keep steering the kite in the same direction until it walks itself around to the edge of the wind window and slowly starts to rear up onto its side towards the normal launch position. 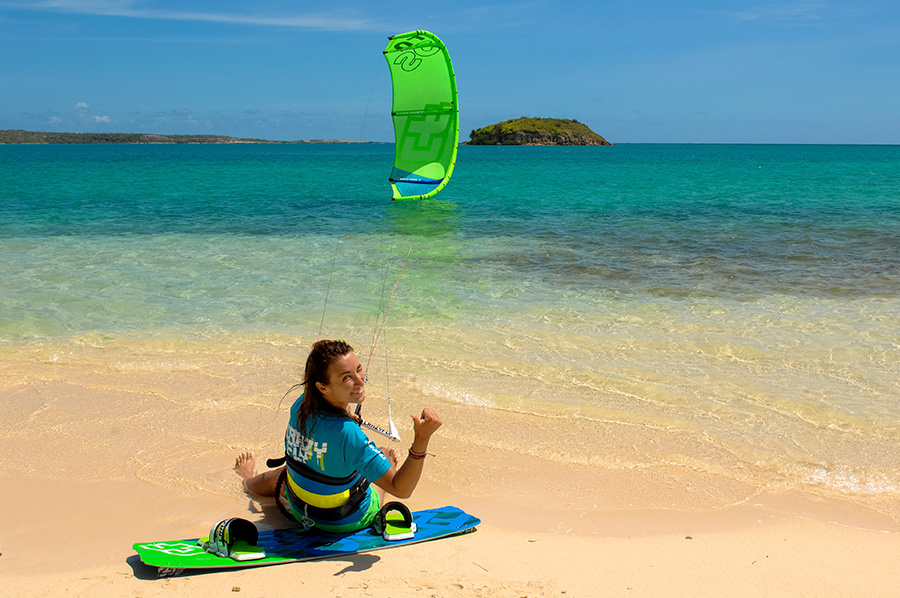 Something to beware of at this point is that the kite can start to set itself into this relaunch position well back of the edge of the window, i.e. when it is still close to the power zone, with the result that if it relaunches here you will be flung forward. This is especially likely to happen in strong winds or where the kite is being “assisted” with the launch by a strong current or waves. If you’re in deep water with loads of space this type of launch can be fun, if not, we suggest sheeting the bar out slightly while continuing to steer the kite.

At this point you are simply going to launch the kite as you would from the beach, with one major difference. Because the bottom panel of the kite is likely filled with water it has the tendency to suck the kite down back onto (and under) the surface. This means you will need to apply more steering than normal to release the kite. To do this you’ll normally need to have the bar pretty far in to really provide the leverage and power to get the kite to empty this water out. However if once the kite is free of this water you keep the bar in, the kite will simply stall backwards, dead fish like, into the water, or worse, loop round the power zone and force you to do an impromptu and very undignified impression of superman.

For this reason as soon as you see that the kite is about to release from the water, let the bar out fairly quickly (but still in a controlled manner) while maintaining the correct amount of steering to bring the kite upwards towards 12 o’clock. This will prevent the kite from back stalling and allow it to relaunch just as you would from the beach.

Breaking it Down – Decreasing Circles of Mastery

Release the bar (with both hands) push it away from you and reach down and grab the outer line closest to the edge of the window that you want to relaunch the kite (if you’re not sure which one this is, either of the outside lines will do to start with, if the kite starts steering the wrong way simply use the other one!). Aim to grab the line about 30 – 50 cms up the line (30 – 50 cms away from where it attaches to the bar).

Then holding the line between forefinger and thumb, GENTLY pull it (back) towards you and (up) over your shoulder (the same shoulder as the hand that you are using). This will give you extra leverage that will enable you to get the kite in to the launch position much faster.

The key here is be gentle, think of smooth Tai Chi movements not boxing jabs as you attempt to relaunch the kite this way.

As soon as the kite releases from the water, release the line. If you hold on to the line for too long the kite will spiral round and either back stall, or worse, loop round and crash back on to the water). Once you’ve released the line, grab the bar again with 2 hands and voila…you’re good to go!

While attempting to relaunch, the kite must be full of wind 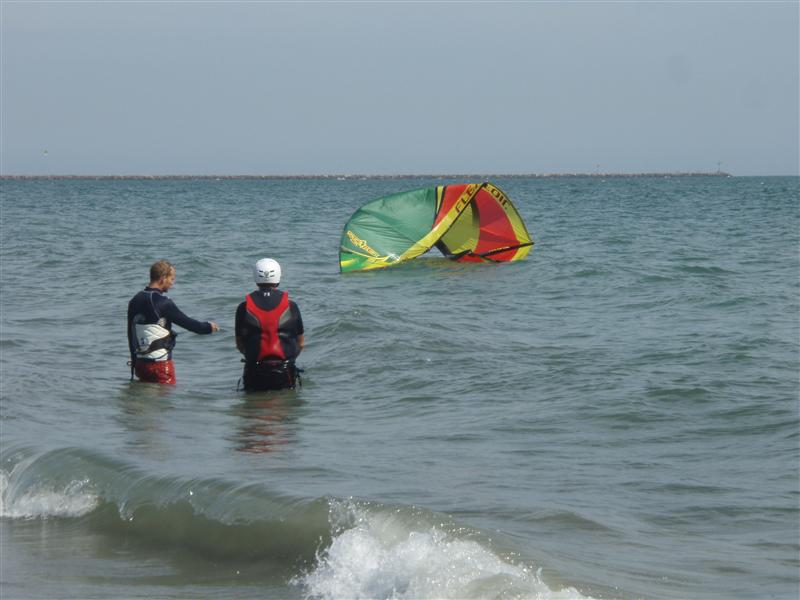 Watch for the wing tips collapsing or the trailing edge near to the wingtips folding down over the canopy. This is normally a sign that the kite is in the wrong position to launch (i.e. too far upwind), there’s not enough wind to relaunch or, more often, that you are pulling the line too hard…release the line slowly until the kite refills with air and then gently pull it back over your shoulder. By doing this you should ensure that the kite remains full of wind and starts to roll onto its side in to the launch position. If the wingtips fold in again, then release the line and start again…think of the line the same way you would a clutch in a manual car…squeeze on the line, don’t yank, this is not a fight, it’s a caress!

In shore break you can use the white water to prop the edge up (be careful as if the wave is too big it will swallow the kite and suck it down). As the white water is approaching give the kite a little extra steer to allow the water to pass underneath it. The added resistance of the water against the leading edge can (if you’re lucky) force the kite further up into the relaunch position and make it easier to lift off the water.

In the same manner you can also use the current. If you attempt to relaunch in the opposite direction to that in which the current is running, the kite encounters more resistance. This again can force it into the relaunch position early and make relaunching it that much quicker…again beware of doing this if you’re massively overpowered as the kite will be launching that much closer to the power zone. 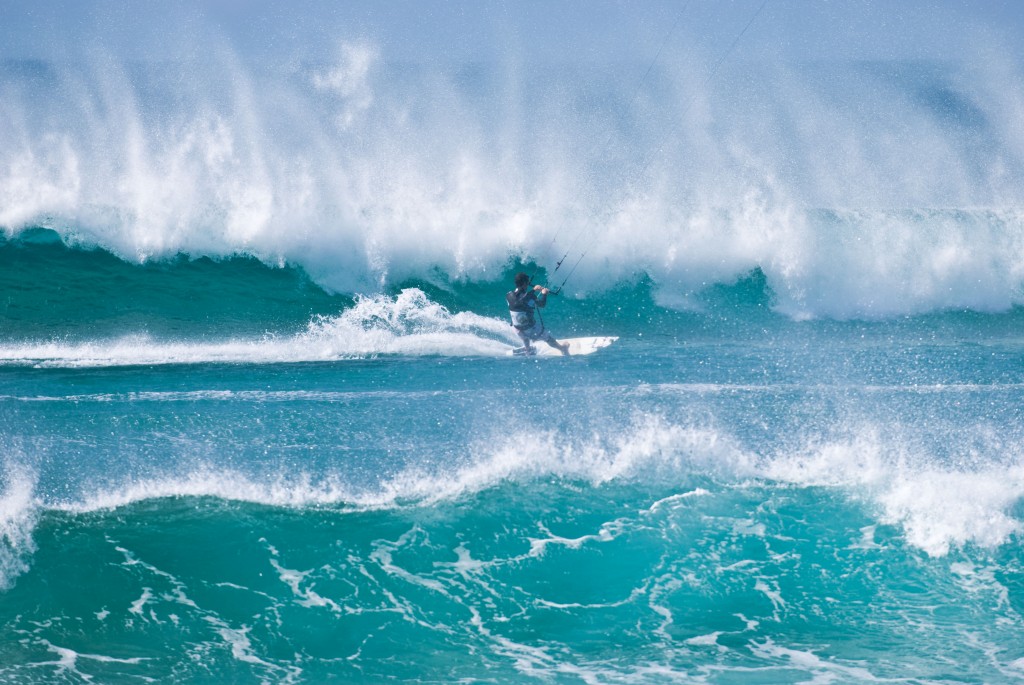 In big waves speed is key…if you can give the kite a quick tug on one line and get it out immediately it will make your life a LOT easier. Once the waves swamp the kite, it becomes much more tricky to relaunch. However once it has been swamped it pays to take your time, sometimes just by letting it get hit by another wave it can reform and ready itself for relaunch.

A trick that can be useful if the kite has crashed directly downwind of you is to use one line to massively oversteer the kite, thus causing it to drop on to its back. Then pull (I would suggest with some enthusiasm) on the 2 centre lines to pull the kite out of the water directly downwind of you. I would recommend this for experts only as if it goes wrong it leaves you in a VERY vulnerable position for when that next wave comes rolling in.

If the waves are big and you are being dragged behind a kite caught in a wave, then be ready to release. This will protect you and your kite. In big waves you should ALWAYS be ready to release and be very happy with your safety release. Being towed underwater by a kite that has been caught in a wave is not fun, neither is watching said wave punch through the canopy of your kite because you are providing a counterweight to its force.

We offer a week Learn to Kitesurf Course in which we GUARANTEE you’ll learn to become an independent rider or you can come back for HALF PRICE until you are.

Check it out HERE.